Xin Chao, which translates to “hello” in Vietnamese, opened in the historical Sixth Ward in October, 2020. Here, diners savor contemporary Vietnamese cuisine, with mouth-watering dishes like smoked beef cheek dumplings, tamarind king crab, and lemongrass-buttermilk fried chicken. At the helm are acclaimed Houston-native Co-Executive Chefs/Owners Christine Ha and TJ Nguyen. Chef Ha first exploded into the national spotlight as the Season 3 winner Gordon Ramsay's popular MasterChef competition show on FOX. She then opened her first eatery, The Blind Goat, which quickly garnered major acclaim both locally (three star review from the Houston Chronicle), and nationally (Semi-Finalist for James Beard's "Best New Restaurant in America" Award in 2020). And, as if her culinary talents were't inspiring enough, did we mention that, as a result of multiple sclerosis, Chef Ha has been almost completely blind since 2007 and uses assistive technologies in her cooking? Chef Nguyen's resume is no joke either as, in addition to his role at Xin Chao, he serves as Chef/Partner of another beloved Houston eatery: Saigon House. Busy guy! We'll be taking over the entire restaurant for this event, and both chefs will be coming out of the kitchen throughout the evening to share stories, introduce the food, and partake in a Q&A with attendees. 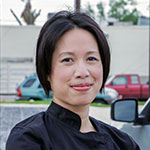 Best known for being the blind winner of Season 3 of Gordon Ramsay's "MasterChef", Christine Ha also authored the New York Times best-selling cookbook, Recipes from My Home Kitchen, and co-hosted the cooking show, “Four Senses” on AMI Canada. Her first restaurant, The Blind Goat, has garnered a glowing three stars from the Houston Chronicle and was named a Semi-Finalist for James Beard's "Best New Restaurant in America" Award in 2020. 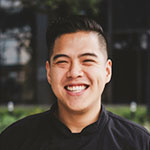 After graduating from Syracuse with a degree in Hospitality Management, Chef Nguyen first honed his craft in New York restaurants for two years. Upon returning home to Houston in 2014, he opened Wokker TX Ranger, a food truck serving Asian-Texan fare. In 2017, he took the helm at Saigon House Midtown, and he led the eatery to national prestige as one of Thrillist’s "Best Vietnamese Restaurants in America" and Houston Press' "Best Vietnamese Restaurant."

Do I have to bring printed tickets to the event?
No tickets are needed.
What does the ticket price cover?
The ticket price covers the full cost of the meal.
What dietary restrictions/food allergies can be accommodated at this event?
At this event, we will be able to accommodate all dietary restrictions and food allergies except for vegetarians. Please make sure to Update Your Dietary Restrictions within your Account Info before or after you purchase tickets, or email us at [email protected] after you purchase tickets to let us know what your allergies/restrictions are.
What must I bring to the event?
Please make sure to bring proof of COVID-19 vaccination (refer to the "what qualifies as valid proof of vaccination" question below for more info on this) and a government-issued photo ID. Additionally, if you plan on purchasing beverages during the event, make sure to bring cash.
Do guests need to be of a certain age to attend this event?
Yes. All attendees must be 21+ to gain entry.
Can I bring guests/non-members to this event?
Yep! For this event, guest tickets are $75 + tax & tip, and you can bring up to 3 guests. Please note, guests are not allowed to attend unaccompanied by a member and all guests must also present proof of full vaccination upon arrival at the event in order to gain entry.
What happens if the weather doesn't allow for this event to take place outdoors?
Our intent is to host this event outdoors. If the weather doesn't cooperate, we will be moving the event indoors. Any attendees who are not comfortable with indoor dining will be able to pick up their meal to-go, as we will not be able to offer refunds in this situation.
What is the event ticket cancellation/refund policy?
Tickets to our events are non-refundable. However, for emergency requests, we may allow members to transfer their tickets to friends, provided the guest ticket surcharge of $25 is paid when transferring a member ticket to a non-member. All ticket transfer requests (as well as the guest ticket surcharge) must be sent to us prior to the event. Any guests who fail to present proof of full vaccination upon arrival, and/or have not paid the guest ticket surcharge, will not be allowed entry.
What qualifies as valid proof of vaccination?
To verify that you are fully vaccinated, and gain entry to the event, you must present to our event lead any one of the following forms of proof: your original physical vaccination card, a clearly legible photo of your original vaccination card, or the CLEAR Health Pass App. Please note, you will be only be considered “fully vaccinated” if it has been at least 14 days since you've received either (a) a second shot of the Moderna or Pfizer COVID-19 vaccine, or (b) a single shot of the Johnson & Johnson vaccine. More questions about this? Check out our COVID-19-Related Event Requirements.