OK, read carefully now: the word is not “tsimmis” (the traditional Jewish stew of carrots and prunes, often served at the Passover table), but, rather “tsismis,” which is the Tagalog reworking of the Spanish word “chisme,” meaning “gossip.” This brand-new Filipino restaurant, opened this past June on the Lower East Side’s Orchard Street, is, according to the New York Times, “worth talking about.” The Times loved Executive Chef Jappy Afzelius’ kinilaw, a Filipino ceviche, as well as his pinsit frito (fried pork-and-carrot wontons) and his laing (kale, coconut milk, shrimp paste, smoked fish). Chef Afzelius’s expertise derives, in part, from his training in French fine dining, under the tutelage of Alain Ducasse and David Burke. Now he works his magic in a inventive dining space that is anchored by a copper bar in the center with lots of plants and reclaimed wood. We will be taking over Tsismis for this event, and Chef Afzelius will be in and out of the kitchen to answer your questions and tell you everything you always wanted to know about Filipino cuisine, which is rising in prominence in all the major food capitals of the world. 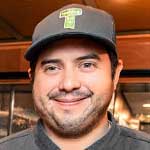 Born in the Philippines, Chef Afzelius is a graduate of the prestigious Enderun Colleges in Manila before cutting his teeth working under Alain Ducasse at his celebrated Parisian restaurant Allard. He earned a Masters Degree in Food Culture & Communications from the University of Gastronomic Sciences in Pollenzo, soon after cooking his way across Italy, France, and California before finally settling in NYC. He joined the team at Tsismis in June 2019.

Do I have to bring printed tickets to the event?
No tickets are needed.
What can/can't I bring to the event?
Please bring your ID as well as cash if you plan on purchasing beverages.
Are there ID requirements or an age limit to attend?
Yes. ID is required and you must be 21+ to attend.
What is the event ticket cancellation/refund policy?
Tickets to our events are non-refundable. However, for first-time emergency requests, we may allow members to transfer their tickets to friends, provided the guest ticket surcharge of $25 is paid when transferring a member ticket to a non-member. All ticket transfer requests must be emailed to us prior to the event and the guest ticket surcharge of $25 must be paid prior to the event. Guests who have not paid the guest ticket surcharge will not be allowed entry.
What does the ticket price cover?
The ticket price covers the full cost of the meal.
Can I bring guests/non-members to this event?
Yep! For this event, guest tickets are $70 + tax & tip, and you can bring up to 3 guests. Please note, guests are not allowed to attend unaccompanied by a member.
What dietary restrictions/food allergies can be accommodated at this event?
At this event we will be able to accommodate most dietary restrictions and food allergies. Just make sure to update your dietary restrictions within your Account Info before or after you purchase tickets, or email us at [email protected] after you purchase tickets to let us know what your allergies/restrictions are so we can give the chef a heads up.