Located in the heart of the Elizabeth neighborhood, The Stanley, which opened in 2018, is owned and operated by two-time James Beard Foundation semifinalist Chef Paul Verica, who also owns the popular Orto Italian Kitchen. Chef Verica started his culinary career under the best of circumstances. He staged in France for two Michelin three-starred chefs, whose influences are still felt in his cooking today. After cooking at such restaurants as The Duke Mansion and The Historic Dunhill Hotel in Charlotte and The Longview in Waxhaw, he opened his own restaurant, Heritage Food and Drink, also in Waxhaw, in 2013. All his restaurants have been seasonally driven and expressive of his close relationships with local farms and purveyors. At The Stanley, named for the business district that used to be known as Stanleyville, he is turning out fare that is, on the one hand, Southern-classic (think cornbread with honey and beef cheeks with sweet potato and greens) but, on the other hand, seriously inventive (duck confit steam buns with Chinese five-star powder and kimchi and foie gras with maple, peaches, beautyberry, and vanilla). Condé Nast Traveler calls it “farm-driven with flair,” which sounds mighty inviting to our ears. 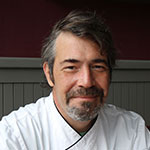 A Philadelphia native, Chef Verica moved to France after graduating from The Restaurant School at Walnut Hill to stage for two Michelin three star chefs, Alain Passard of L'Arpege in Paris and Bernard Louisseau of La Cote D'Or. In 1998, Chef Verica moved to Charlotte and then proceeded to work as Executive Chef for well-acclaimed restaurants in the area, including The Duke Mansion, Providence Bistro, The Historic Dunhill Hotel and The Club at Longview. He opened his first restaurant, Heritage Food & Drink, in 2013 in Waxhaw and then opened the Stanley in 2018.

Do I have to bring printed tickets to the event?
No tickets are needed.
What does the ticket price cover?
The ticket price covers the full cost of the meal.
What dietary restrictions/food allergies can be accommodated at this event?
At this event we will be able to accommodate all dietary restrictions and food allergies. Just make sure to update your dietary restrictions within your Account Info before or after you purchase tickets, or email us at [email protected] after you purchase tickets to let us know what your allergies/restrictions are so we can give the chef a heads up.
What must I bring to the event?
Please make sure to bring proof of COVID-19 vaccination (refer to the "what qualifies as valid proof of vaccination" question below for more info on this) and a government-issued photo ID. Additionally, if you plan on purchasing beverages during the event, make sure to bring cash.
Do guests need to be of a certain age to attend this event?
Yes. All attendees must be 21+ to gain entry.
Can I bring guests/non-members to this event?
Yep! For this event, guest tickets are $75 + tax & tip, and you can bring up to 3 guests. Please note, guests are not allowed to attend unaccompanied by a member and all guests must also present proof of full vaccination upon arrival at the event in order to gain entry.
What is the event ticket cancellation/refund policy?
Tickets to our events are non-refundable. However, for emergency requests, we may allow members to transfer their tickets to friends, provided the guest ticket surcharge of $25 is paid when transferring a member ticket to a non-member. All ticket transfer requests (as well as the guest ticket surcharge) must be sent to us prior to the event. Any guests who fail to present proof of full vaccination upon arrival, and/or have not paid the guest ticket surcharge, will not be allowed entry.
What qualifies as valid proof of vaccination?
To verify that you are fully vaccinated, and gain entry to the event, you must present to our event lead any one of the following forms of proof: your original physical vaccination card, a clearly legible photo of your original vaccination card, or the CLEAR Health Pass App. Please note, you will be only be considered “fully vaccinated” if it has been at least 14 days since you've received either (a) a second shot of the Moderna or Pfizer COVID-19 vaccine, or (b) a single shot of the Johnson & Johnson vaccine. More questions about this? Check out our COVID-19-Related Event Requirements.
Will this event be hosted indoors or outdoors?
This event will be hosted indoors, as we will be taking over the entire restaurant for it. The restaurant will be closed to the public, and only fully vaccinated attendees will be allowed entry.