Executive Chef/Owner Christa Csoka, a Daniel Boulud alumna, has given NoDa a very special restaurant, cocktail and wine bar, and art gallery. So special, in fact, that Charlotte Magazine named it to its "Best of the Best" list this year. The daughter of an Eastern European refugee-turned-army officer and West Point professor, Chef Csoka's love for entertaining and passion for food began when she was a child, helping her mother host dinners and events for officers, cadets, and even senators. She graduated top of her class from the French Culinary Institute and worked as a chef at French restaurants like Daniel, Tru, and the Pump Room, as well as restaurants in Austin and Charlotte. She has lived and visited many cities all over the world, all of which have lent her a diverse culinary perspective and palate. Now, she is delighting diners with classics like mussels in white wine, burrata salad, grilled Spanish octopus, shrimp and grits, and much more, served up in a setting that features monthly gallery shows. We are excited to visit The Artisan's Palate and hear all about Chef Csoka's life journey and her thoughts about food. 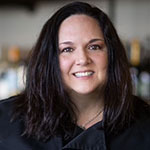 A New York native, Chef Csok graduated top of her class from the French Culinary institute in 2003. She then spent several years honing her craft in top Michelin-Starred kitchens throughout NYC and Chicago – including Tru, Daniel, and The Pump Room – under mentors like Daniel Boulud and Jacques Torres. After settling down in Charlotte, she opened The Artisan's Palate in 2019.

Do I have to bring printed tickets to the event?
No tickets are needed.
What does the ticket price cover?
The ticket price covers the full cost of the meal.
Do guests need to be of a certain age to attend this event?
Yes. All attendees must be 21+ to gain entry.
What must I bring to the event?
Please make sure to bring a government-issued photo ID. Additionally, if you plan on purchasing beverages during the event, make sure to bring cash.
Does this restaurant allow BYOB?
No. This restaurant is a non-BYO establishment. Outside alcohol will not be permitted at this event.
Can I bring guests/non-members to this event?
Yep! For this event, guest tickets are $85 + tax & tip, and you can bring up to 3 guests. Please note, guests are not allowed to attend unaccompanied by a member.
What is the event ticket cancellation/refund policy?
Tickets to our events are non-refundable. However, for emergency requests, we may allow members to transfer their tickets to friends, provided the guest ticket surcharge of $25 is paid when transferring a member ticket to a non-member. All ticket transfer requests (as well as the guest ticket surcharge) must be sent to us prior to the event. Any guests who have not paid the guest ticket surcharge will not be allowed entry.
What dietary restrictions/food allergies can be accommodated at this event?
At this event we will be able to accommodate all dietary restrictions and food allergies. Just make sure to update your dietary restrictions within your Account Info before or after you purchase tickets, or email us at [email protected] after you purchase tickets to let us know what your allergies/restrictions are so we can give the chef a heads up.
What COVID safety precautions will be taken at this event?
At this event, we will be accommodating all requests for separate tables rather than communal seating. Additionally, all food will be served individually-plated rather than family-style. As per local guidelines, as well as the restaurant’s own policy, attendees will not be required to present proof of vaccination for entry.