Opened in 2019, Stina, in the Newbold neighborhood, highlights Executive Chef/Co-Owner Bobby Saritsoglou’s Greek heritage with contemporary Mediterranian-inspired dishes like borek, chicken kebabs rubbed with walnut dukka, chicken shawarma, Turkish lamb dumplings known as manti, and what Craig LaBan in the Philadelphia Inquirer calls “the best octopus dish in town.” Everything is done with the flair and care one might expect from a chef who honed his craft in top Philly kitchens such as Opa, Will BYOB, and Santucci’s. You’ll love the quirky environment, curated by Chef Saritsoglou’s wife Christina (hence the name: Stina), with walls hung with old photos, preserved butterflies, tambourines, parts of old doors, and more. Stina also has a strong philanthropic streak, with a portion of its proceeds every month going to local charities. We will be taking over the restaurant for this event, and Chef Saristoglou will, of course, be in and out of the kitchen throughout the evening to answer your questions and share his food philosophy. Hopefully, you're as excited about this as we are! 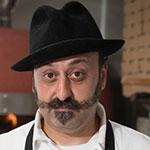 Chef Saritsoglou has worked in the restaurant industry for over 20 years, honing his craft at Philadelphia institutions including Opa and Will BYOB. Taking inspiration from both the foods of the Mediterranean and his own Greek heritage, he opened Stina with his wife Christina in May 2019.

Do I have to bring printed tickets to the event?
No tickets are needed.
What does the ticket price cover?
The ticket price covers the full cost of the meal.
Do guests need to be of a certain age to attend this event?
Yes. All attendees must be 21+ to gain entry.
Can I bring guests/non-members to this event?
Yep! For this event, guest tickets are $75 + tax & tip, and you can bring up to 3 guests. Please note, guests are not allowed to attend unaccompanied by a member and all guests must also present proof of full vaccination upon arrival at the event in order to gain entry.
What is the event ticket cancellation/refund policy?
Tickets to our events are non-refundable. However, for emergency requests, we may allow members to transfer their tickets to friends, provided the guest ticket surcharge of $25 is paid when transferring a member ticket to a non-member. All ticket transfer requests (as well as the guest ticket surcharge) must be sent to us prior to the event. Any guests who fail to present proof of full vaccination upon arrival, and/or have not paid the guest ticket surcharge, will not be allowed entry.
What must I bring to the event?
Please make sure to bring proof of COVID-19 vaccination (refer to the "what qualifies as valid proof of vaccination" question below for more info on this) and a government-issued photo ID. Additionally, please note this restaurant is BYOB, so make sure to bring your own wine and/or beer if you'd like!
What dietary restrictions/food allergies can be accommodated at this event?
At this event, we will be able to accommodate all dietary restrictions and food allergies except allium or dairy allergies. Please make sure to Update Your Dietary Restrictions within your Account Info before or after you purchase tickets, or email us at [email protected] after you purchase tickets to let us know what your allergies/restrictions are.
What happens if the weather doesn't allow for this event to take place outdoors?
Our intent is to host this event outdoors. If the weather doesn't cooperate, we will be moving the event indoors. Any attendees who are not comfortable with indoor dining will be able to pick up their meal to-go, as we will not be able to offer refunds in this situation.
What qualifies as valid proof of vaccination?
To verify that you are fully vaccinated, and gain entry to the event, you must present to our event lead any one of the following forms of proof: your original physical vaccination card, a clearly legible photo of your original vaccination card, or the CLEAR Health Pass App. Please note, you will be only be considered “fully vaccinated” if it has been at least 14 days since you've received either (a) a second shot of the Moderna or Pfizer COVID-19 vaccine, or (b) a single shot of the Johnson & Johnson vaccine. More questions about this? Check out our COVID-19-Related Event Requirements.