Situated next to the Groundlings Theatre in Melrose, just west of La Brea, Ronan is the highly personal creation of Executive Chef/Co-Owner Daniel Cutler, an L.A. native late of Sotto and Alimento, and his wife Caitlin, the restaurant’s manager. Pizza is what they are best known for, baked in a white dome oven that sports a figurine of Jesus, but not any old pizza. Consider, for instance, the pie known a Sweet Cheeks, which features house-cured guanciale, Apullian ricotta forte, and cacio e pepe honey. Beyond pizza, there are superb offerings like artichoke crostini, burrata, an extraordinary foglie salad of shaved fennel and cucumber vinaigrette, and a killer pork chop. Thrillist has named Ronan to its January 2020 list of “The Best Restaurants in Los Angeles Right Now” while The Infatuation heralds Ronan as “the most sneakily impressive restaurant in the city,” saying “at first glance, [it] is a neighborhood pizzeria…but its greatness will start to sneak up on you.” We will be taking over Ronan for this event, and Chef Cutler will be on hand to answer your questions and discuss his fabulous obsession with everything Italian. 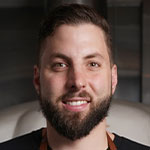 An LA native, Chef Cutler began his cooking career in Colorado receiving extensive training in French technique at Boulder's prestigious Flagstaff House. Moving back to Los Angeles in 2010, he developed a passion for Italian food while honing his craft at Sotto. In 2018, he and his wife Caitlin opened Ronan together to bring their personal brand of Italian influenced flavors to Los Angeles cooking.

Do I have to bring printed tickets to the event?
No tickets are needed.
What must I bring to the event?
Please make sure to bring a government-issued photo ID. Additionally, if you plan on purchasing beverages during the event, make sure to bring cash.
Do guests need to be of a certain age to attend this event?
Yes. All attendees must be 21+ to gain entry.
What is the event ticket cancellation/refund policy?
Tickets to our events are non-refundable. However, for emergency requests, we may allow members to transfer their tickets to friends, provided the guest ticket surcharge of $25 is paid when transferring a member ticket to a non-member. All ticket transfer requests (as well as the guest ticket surcharge) must be sent to us prior to the event. Any guests who have not paid the guest ticket surcharge will not be allowed entry.
What does the ticket price cover?
The ticket price covers the full cost of the meal.
Can I bring guests/non-members to this event?
Yep! For this event, guest tickets are $75 + tax & tip, and you can bring up to 3 guests. Please note, guests are not allowed to attend unaccompanied by a member.
What dietary restrictions/food allergies can be accommodated at this event?
At this event, the chef will be able to accommodate most dietary restrictions and food allergies. Please note that accommodations can only be made if you Update Your Dietary Restrictions or email us at [email protected] no less than 72 hours before the event.