Where does the name of this new East Passyunk eatery come from? Greek philosopher Heraclitus, who said, “No man ever steps in the same river twice, for it’s not the same river and he’s not the same man.” Executive Chef/Owner Randy Rucker believes that menus—and chefs—should be constantly evolving. He has cooked in California, then Houston, then his hometown of Tomball, Texas, where he opened Bootsie’s and was nominated for two James Beard awards, then the East Coast, and finally Philadelphia, hometown of his wife Amanda, with whom he opened the rustic-chic River Twice this past October. Here, you will find creative, locally sourced, seasonal fare, with dishes like smoked duck, tartare of venison, and sea scallops with kabocha-brown butter puree and nasturtium salsa verde. No wonder Eater has named River Twice to its list of “The Hottest New Restaurants in Philly, January 2020.” We will be taking over River Twice for this event, and Chef Rucker will be on hand to answer your questions and discuss the joys and the challenges of opening a restaurant of one’s own. 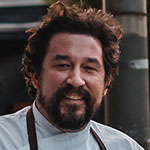 Raised in Tomball, Texas, Chef Rucker launched his restaurant empire with Houston's celebrated laidback manor, following it up by Bootsie's, a tribute to his mother for which he was named a rising star from Starchefs.com & nominated for two James Beard awards, and Restaurant Bramble. He has also served as Executive Chef of The Rainbow Lodge in Houston. In 2019, he relocated to Philadelphia to open River Twice.

All savory courses will be served family-style. Dessert will be portioned individually. No substitutions or modifications to the menu will be available.

Do I have to bring printed tickets to the event?
No tickets are needed.
What can/can't I bring to the event?
Please bring your ID as well as cash if you plan on purchasing beverages.
Are there ID requirements or an age limit to attend?
Yes. ID is required and you must be 21+ to attend.
What is the event ticket cancellation/refund policy?
Tickets to our events are non-refundable. However, for first-time emergency requests, we may allow members to transfer their tickets to friends, provided the guest ticket surcharge of $25 is paid when transferring a member ticket to a non-member. All ticket transfer requests must be emailed to us prior to the event and the guest ticket surcharge of $25 must be paid prior to the event. Guests who have not paid the guest ticket surcharge will not be allowed entry.
What does the ticket price cover?
The ticket price covers the full cost of the meal.
Can I bring guests/non-members to this event?
Yep! For this event, guest tickets are $70 + tax & tip, and you can bring up to 3 guests. Please note, guests are not allowed to attend unaccompanied by a member.
Does this restaurant serve alcoholic beverages?
This restaurant is a BYO establishment, so please feel free to bring your own alcoholic beverages.
Which dietary restrictions/food allergies can be accommodated at this event?
The chef will be unable to accommodate attendees with dietary restrictions at this event. No substitutions or modifications to the menu will be available.