Chicago-born Alberto Gonzalez, Provision’s Executive Chef/Co-Owner, has a mile-long resume that includes stints at the Windy City’s Wolfgang Puck’s, Spago, Ricky Bayless’s Topolobampo, and the world-class, Michelin-rated Spiagga, as well as Austin establishments like Red’s Porch, Jacoby’s, and Grizzelda’s. He opened Provision in the Quarry this past October with a mission: to offer Austin diners “approachable” food. His deeply comforting menu includes impeccably prepared renditions of old favorites like shrimps and grits, beer-brined, twice-fried lollipop chicken wings served with buffalo sauce and blue cheese, short ribs quesadillas, and farro bowls with braised beef, veggies, kimchi, and a six-minute egg. Austin Eater promptly responded by placing Provision, with its midcentury/modern vibe, on its list of “11 Hottest Restaurants in Austin, January 2020.” We will be taking over Provision for our event, and Chef Gonzalez will be in and out of the kitchen to answer your questions and discuss what “approachable” food means to him. 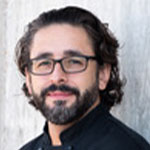 A Chicago native, Chef Gonzalez moved to Austin in September 2012 for the thriving food scene and killer weather. A 17-year veteran of such Chicago institutions as Rick Bayless’s Topolobampo, Spago, Ambria, and the Michelin-starred Spiaggia, he spent time in Austin's Jacoby’s Restaurant & Mercantile, NXNW Brewing Co. and its sister restaurant Red’s Porch before opening Provision in October 2019 with his wife Poeta.

Do I have to bring printed tickets to the event?
No tickets are needed.
What must I bring to the event?
Please make sure to bring a government-issued photo ID. Additionally, if you plan on purchasing beverages during the event, make sure to bring cash.
Do guests need to be of a certain age to attend this event?
Yes. All attendees must be 21+ to gain entry.
What is the event ticket cancellation/refund policy?
Tickets to our events are non-refundable. However, for emergency requests, we may allow members to transfer their tickets to friends, provided the guest ticket surcharge of $25 is paid when transferring a member ticket to a non-member. All ticket transfer requests (as well as the guest ticket surcharge) must be sent to us prior to the event. Any guests who have not paid the guest ticket surcharge will not be allowed entry.
What does the ticket price cover?
The ticket price covers the full cost of the meal.
Can I bring guests/non-members to this event?
Yep! For this event, guest tickets are $75 + tax & tip, and you can bring up to 3 guests. Please note, guests are not allowed to attend unaccompanied by a member.
What dietary restrictions/food allergies can be accommodated at this event?
The chef will be unable to accommodate vegetarians at this event. For other allergies or special diets, please note that accommodations can only be made if you Update Your Dietary Restrictions or email us at [email protected] no less than 72 hours before the event.