It’s all about comfort now, isn’t it? Comfort and fun. Olmstead, which opened in 2019 in Capitol Hill, delivers those essential qualities in spades. Following his graduation from culinary school, Chef Jesse Elliott learned the ropes in the restaurants of Tom Douglas, James Beard Award winner Best Northwest Chef. He, his wife Lisa Tomlinson, who now manages the front of the house at Olmstead, and their business partner Gregg Tomlinson were the team behind the highly popular Southern restaurant, the Witness Bar. For their next act, they envisioned the Broadway Grill, the late, legendary LGBTQ hangout, as a restaurant, bar, and event space. Thus, was born Olmstead, whose menu is reminiscent of an upscale American diner with elevated and original takes on classic diner staples, like vegetable fritters, Beef Stroganoff Poutine made with locally sourced small batch sour cream, Scotch eggs with apricot chutney and malt vinegar yoghurt, corned beef brisket, vegan meatloaf, and clam chowder. The fried chicken at Witness made Eater's list of the best fried chicken in the city, and guess what folks? Fried chicken’s on the menu at Olmstead. Hope to see you there! 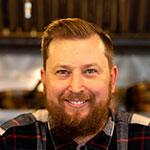 A Washington State native, Chef Elliott attended culinary school at Seattle Central Community College. From there, he honed his culinary skills through various restaurants under Tom Douglas' group. In his spare time, he began to co-host monthly themed pop-up dinners at Volunteer Park Cafe. As a result, in 2013, Chef Elliott was hired as the opening Chef for Witness Bar, which won the award for Best New Restaurant from Evening Magazine. In 2019, he helped open Olmstead in the Capitol Hill neighborhood.

Each course will be individually plated.

Do I have to bring printed tickets to the event?
No tickets are needed.
What does the ticket price cover?
The ticket price covers the full cost of the meal.
What dietary restrictions/food allergies can be accommodated at this event?
At this event we will be able to accommodate all dietary restrictions and food allergies. Just make sure to update your dietary restrictions within your Account Info before or after you purchase tickets, or email us at [email protected] after you purchase tickets to let us know what your allergies/restrictions are so we can give the chef a heads up.
Do guests need to be of a certain age to attend this event?
Yes. All attendees must be 21+ to gain entry.
What must I bring to the event?
Please make sure to bring a government-issued photo ID. Additionally, if you plan on purchasing beverages during the event, make sure to bring cash.
Can I bring guests/non-members to this event?
Yep! For this event, guest tickets are $80 + tax & tip, and you can bring up to 3 guests. Please note, guests are not allowed to attend unaccompanied by a member.
What is the event ticket cancellation/refund policy?
Tickets to our events are non-refundable. However, for emergency requests, we may allow members to transfer their tickets to friends, provided the guest ticket surcharge of $25 is paid when transferring a member ticket to a non-member. All ticket transfer requests (as well as the guest ticket surcharge) must be sent to us prior to the event. Any guests who have not paid the guest ticket surcharge will not be allowed entry.
What COVID safety precautions will be taken at this event?
At this event, we will be accommodating all requests for separate tables rather than communal seating. Additionally, all food will be served individually-plated rather than family-style. As per local guidelines, as well as the restaurant’s own policy, attendees will not be required to present proof of vaccination for entry.