This beloved Pennsport eatery is the brainchild of Chef Ari Miller, who named it for his favorite Tel Aviv fishmonger. A native of Bucks County, Miller went to Israel as a youth, working on a kibbutz and waiting tables before becoming a food writer for the Jerusalem Post. He then transitioned into the professional kitchen, working at The Minzar, Tel Aviv’s legendary 24-hour bar, where he learned food preparation from Eastern European classics (sausages, pickling, fermenting) to North African cuisine (whole animal use) to Middle Eastern standards (hummus, spices, salads). Back in Philadelphia, he cooked at High Street on Market, Percy Street Barbecue, Watkins Drinkery, Lost Bread Co., and Zahav, before opening Musi in February 2019. Philadelphia Magazine has regularly listed Musi as one of its 50 Best Restaurants, and Eater, citing signature dishes like beef heart tartare, pate served with a soft pretzel, mustard, and pears, and orange blossom malabi (custard) with honey and thyme, named Musi BYOB one of their "16 Best New Restaurants in America" in 2019. We will be taking over the entire restaurant for this event, and Chef Miller will spend time visiting with us, taking our questions, and sharing his love of Israeli food. 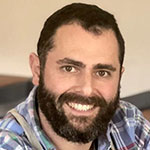 A Philly native, Chef Miller broke into the culinary world during a decade spent living in Tel Aviv, first as the food writer for The Jerusalem Post, then in the kitchen of renowned Chef Rima Olvera's Oasis. Upon returning to Philly, he further honed his craft at several of the city's most renowned eateries – Zahav and High Street on Market – before opening Musi in February 2019.

As per this restaurant's policy, all attendees must be fully vaccinated and will be required to show proof of vaccination at the door to gain entry. We will also be accommodating all requests for separate tables rather than communal seating, and all food will be served individually plated.

Do I have to bring printed tickets to the event?
No tickets are needed.
What does the ticket price cover?
The ticket price covers the full cost of the meal.
Do guests need to be of a certain age to attend this event?
Yes. All attendees must be 21+ to gain entry.
What is the event ticket cancellation/refund policy?
Tickets to our events are non-refundable. However, for emergency requests, we may allow members to transfer their tickets to friends, provided the guest ticket surcharge of $25 is paid when transferring a member ticket to a non-member. All ticket transfer requests (as well as the guest ticket surcharge) must be sent to us prior to the event. Any guests who have not paid the guest ticket surcharge will not be allowed entry.
Can I bring guests/non-members to this event?
Yep! For this event, guest tickets are $80 + tax & tip, and you can bring up to 3 guests. Please note, guests are not allowed to attend unaccompanied by a member.
What dietary restrictions/food allergies can be accommodated at this event?
At this event, we will only be offering vegetarian, gluten-free, dairy-free, pork-free, and shellfish-free substitutions. Please make sure to Update Your Dietary Restrictions within your Account Info before or after you purchase tickets, or email us at [email protected] after you purchase tickets to let us know what your allergies/restrictions are.
What qualifies as valid proof of vaccination?
To verify that you are fully vaccinated, and gain entry to the event, you must present to our event lead any one of the following forms of proof: your original physical vaccination card, a clearly legible photo of your original vaccination card, or the CLEAR Health Pass App. Please note, you will be only be considered “fully vaccinated” if it has been at least 14 days since you've received either (a) a second shot of the Moderna or Pfizer COVID-19 vaccine, or (b) a single shot of the Johnson & Johnson vaccine. More questions about this? Contact us at [email protected]
What COVID safety precautions will be taken at this event?
As per this restaurant's policy, all attendees must be fully vaccinated and will be required to show proof of vaccination at the door to gain entry. We will also be accommodating all requests for separate tables rather than communal seating, and all food will be served individually plated.
What must I bring to the event?
Please make sure to bring proof of vaccination along with a government-issued photo ID. Additionally, please note this restaurant is BYOB, so make sure to bring your own wine and/or beer if you'd like!