What is the world’s ultimate fusion cuisine? Some might say Malaysian. As a result of historical migrations, colonization by foreign powers, and its geographical position, Malaysia draws from an exceptionally wide range of culinary traditions, with Chinese, Indian, Indonesian, Thai, Portuguese, Dutch, Arabian, and British influences. And Executive Chef/Owner Azalina Eusope, a fifth-generation street food vendor who moved to San Francisco a decade ago, is a truly expert practitioner of Malaysian culinary arts. In 2009, Bon Appetit named her one of the “10 Top Upcoming Chefs” and she has even catered for President Obama. The owner of the popular Azalina’s Malaysian in the Market Street food hall, Chef Eusope is excited and proud to have opened a restaurant of her own in Noe Valley, serving signature dishes like salted fish curry, sweet potato dumplings, and amazing fried chicken. SF Eater has already named Mahila to its list of “Best New Restaurants of 2019,” and The Infatuation calls it “fantastic.” We will be taking over the restaurant for this event, and Chef Eusope will be on hand to answer your questions and discuss her life’s journey. 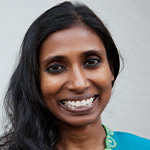 Born on the Malaysian island of Penang, Chef Eusope first began her culinary training in Sinapore before moving to the United States. Settled in San Francisco she began her food business, Azalina's, with the help of the La Cocina culinary incubator non-profit. Since founding her business she has been named one of Bon Appétit's Top 10 Upcoming Chefs. She opened her second Malaysian restaurant, Mahila, in June 2019.

Do I have to bring printed tickets to the event?
No tickets are needed.
What can/can't I bring to the event?
Please bring your ID as well as cash if you plan on purchasing beverages.
Are there ID requirements or an age limit to attend?
Yes. ID is required and you must be 21+ to attend.
What is the event ticket cancellation/refund policy?
Tickets to our events are non-refundable. However, for first-time emergency requests, we may allow members to transfer their tickets to friends, provided the guest ticket surcharge of $25 is paid when transferring a member ticket to a non-member. All ticket transfer requests must be emailed to us prior to the event and the guest ticket surcharge of $25 must be paid prior to the event. Guests who have not paid the guest ticket surcharge will not be allowed entry.
What does the ticket price cover?
The ticket price covers the full cost of the meal.
Can I bring guests/non-members to this event?
Yep! For this event, guest tickets are $70 + tax & tip, and you can bring up to 3 guests. Please note, guests are not allowed to attend unaccompanied by a member.
What dietary restrictions/food allergies can be accommodated at this event?
At this event, the chef will be able to accommodate most dietary restrictions and food allergies. Please note that accommodations can only be made if you Update Your Dietary Restrictions or email us at [email protected] no less than 72 hours before the event.