In September of 1999, Lula Cafe opened in a small storefront on Logan Square with a four-burner home stove and a dented collection of thrifted pots and pans. Today, stretching three storefronts, it is an institution. Jason Hammel, who has been nominated twice as a finalist for James Beard Best Chef Great Lakes, has created a boheme bistro that was awarded a Michelin Bib Gourmand. Time Out, which named Lula Café to its list of “The 51 Best Restaurants in Chicago,” calls it “a unanimously beloved neighborhood darling that’s been doing the whole farm-to-table thing before it was a thing.” Signature dishes here included such delights as pasta yia yia (bucatini, feta, garlic, brown butter, cinnamon), chickpea and fennel tagine, and duck breast with summer squash, sweet cherries, and peanuts. We can’t wait to visit and to hear from Chef Hammel, who grew up in an Italian family in New Haven, studied writing at Brown University, published articles in Bon Appetit, and is now hard at work on a new cookbook he has under contract. 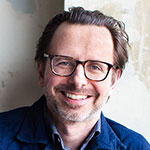 Originally from New Haven, CT, Chef Hammel studied writing at Brown University and then traveled extensively throughout Italy upon graduating, which ignited his passion for food. Upon returning stateside, he moved to Chicago and got his Masters in English from Illinois State University, before deciding to dive headfirst into his culinary passion and open Lula Cafe in 1999. Fast forward and he now has two Finalist nominations for James Beard's "Best Chef: Great Lakes" Award (2019 & 2022), and he's guided Lula to endless accolades as a true Chicago institution.

As per this restaurant's policy, all attendees MUST PROVIDE proof of COVID vaccination at the door to gain entry. We will also be accommodating all requests for separate tables rather than communal seating, and all food will be served individually plated.

Do I have to bring printed tickets to the event?
No tickets are needed.
What does the ticket price cover?
The ticket price covers the full cost of the meal.
What dietary restrictions/food allergies can be accommodated at this event?
At this event we will be able to accommodate all dietary restrictions and food allergies. Just make sure to update your dietary restrictions within your Account Info before or after you purchase tickets, or email us at [email protected] after you purchase tickets to let us know what your allergies/restrictions are so we can give the chef a heads up.
Do guests need to be of a certain age to attend this event?
Yes. All attendees must be 21+ to gain entry.
What is the event ticket cancellation/refund policy?
Tickets to our events are non-refundable. However, for emergency requests, we may allow members to transfer their tickets to friends, provided the guest ticket surcharge of $25 is paid when transferring a member ticket to a non-member. All ticket transfer requests (as well as the guest ticket surcharge) must be sent to us prior to the event. Any guests who have not paid the guest ticket surcharge will not be allowed entry.
What qualifies as valid proof of vaccination?
To verify that you are fully vaccinated, and gain entry to the event, you must present to our event lead any one of the following forms of proof: your original physical vaccination card, a clearly legible photo of your original vaccination card, or the CLEAR Health Pass App. Please note, you will be only be considered “fully vaccinated” if it has been at least 14 days since you've received either (a) a second shot of the Moderna or Pfizer COVID-19 vaccine, or (b) a single shot of the Johnson & Johnson vaccine. More questions about this? Contact us at [email protected]
What COVID safety precautions will be taken at this event?
As per this restaurant's policy, all attendees must be fully vaccinated and will be required to show proof of vaccination at the door to gain entry. We will also be accommodating all requests for separate tables rather than communal seating, and all food will be served individually plated.
What must I bring to the event?
Please make sure to bring proof of vaccination along with a government-issued photo ID.
Can I bring guests/non-members to this event?
Yep! For this event, guest tickets are $80 + tax & tip, and you can bring up to 3 guests. Please note, guests are not allowed to attend unaccompanied by a member.