Just opened in January 2022, this Upper East Side eatery is the creation of restaurateur Boris Lidukhover, owner of the highly acclaimed Sushi Dojo in the East Village, and Laris Sheihet, PhD chemist in food science. They enlisted Executive Chef Jay Alami to help realize their vision for a unique Middle Eastern restaurant and coffeehouse. Chef Alami was born in Casablanca and grew up in Marseille, where his family owned two restaurants. A graduate of the French Culinary Institute, he has cooked at Lot 61 with Arlene Jacobs and Amy Sacco, at Wallsé with Kurt Gutenbrunner, with Emeril Lagasse at Espace, and was an executive chef at W restaurant. At Lashevet, he is turning out dishes that call upon elements from Israeli, Moroccan, and Lebanese cuisine, infused with flavors from Provence. Here, you will find delicious mezze, lamb meatballs with cherry tomato sauce, saffron, and green peas, shrimp gratin in a savory gruyere, shallot, and bechamel sauce, and so much more, all served up in an atmospheric setting that will transport you to another part of the world. We’re excited to visit and to hear about Chef Alami’s life’s journey and his ideas about food. 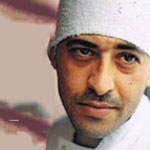 A native of Casablanca, and graduate of NYC's French Culinary Institute, Chef Alami spent over two decades honing his craft in top New York restaurants before taking the helm at Lashevet. To name a few, he cooked at Lot 61 with Arlene Jacobs and Amy Sacco, at Wallsé with Kurt Gutenbrunner, Emeril Lagasse at Espace, and most recently, was Executive Chef at W restaurant.

At this event, we will be accommodating all requests for separate tables rather than communal seating. Additionally, all food will be served individually-plated rather than family-style. As per local guidelines, as well as the restaurant's own policy, we will not be requiring attendees to show proof of vaccination at the door to gain entry.

Do I have to bring printed tickets to the event?
No tickets are needed.
What does the ticket price cover?
The ticket price covers the full cost of the meal.
Do guests need to be of a certain age to attend this event?
Yes. All attendees must be 21+ to gain entry.
What must I bring to the event?
Please make sure to bring a government-issued photo ID. Additionally, if you plan on purchasing beverages during the event, make sure to bring cash.
Can I bring guests/non-members to this event?
Yep! For this event, guest tickets are $80 + tax & tip, and you can bring up to 3 guests. Please note, guests are not allowed to attend unaccompanied by a member.
What is the event ticket cancellation/refund policy?
Tickets to our events are non-refundable. However, for emergency requests, we may allow members to transfer their tickets to friends, provided the guest ticket surcharge of $25 is paid when transferring a member ticket to a non-member. All ticket transfer requests (as well as the guest ticket surcharge) must be sent to us prior to the event. Any guests who have not paid the guest ticket surcharge will not be allowed entry.
What COVID safety precautions will be taken at this event?
At this event, we will be accommodating all requests for separate tables rather than communal seating. Additionally, all food will be served individually-plated rather than family-style. As per local guidelines, as well as the restaurant’s own policy, attendees will not be required to present proof of vaccination for entry.
What dietary restrictions/food allergies can be accommodated at this event?
At this event, we will only be offering vegetarian and dairy-free substitutions. Please make sure to Update Your Dietary Restrictions within your Account Info before or after you purchase tickets, or email us at [email protected] after you purchase tickets to let us know what your allergies/restrictions are.