Opened in 2014, this Fishtown eatery, which Eater named to its 2022 list of "38 Essential Philly Restaurants" and USA Today named to its "10 Best Philly Restaurants of 2022" list, was well-known for being a full-animal husbandry establishment, with an in-house butcher. During the pandemic, however, the focus shifted to sustainable seafood, with dishes like grilled swordfish with cashew dukkah, yellowfin tuna crudo, grilled octopus, and tuna Bolognese. Executive Chef Ian Brown started cooking at 13, learning from his father, a Louisiana chef. Honing his craft in restaurants in Providence, Martha's Vineyard, and New Haven, and then working as Chef de Cuisine at Zahav in Philly, he now collaborates with the best fishermen, farmers, and purveyors in the area and uses the best seasonal produce, local dairy, and regional artisanal products to turn out fare that delights his diners. Infatuation says, "Kensington Quarters has a lot going for it. It's a place where you can always get a good meal." Say no more! 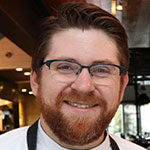 At this event, we will be accommodating timely requests for separate tables (rather than communal seating) to the best of the restaurant's ability. Additionally, all food will be served individually-plated rather than family-style. As per local guidelines, as well as the restaurant's own policy, attendees will not be required to present proof of vaccination for entry.