This legendary Buckman eatery, which opened in 2014 and was promptly named to GQ's list of the nation's "25 Best Restaurants," is the creation of Chef/Co-Owner Bonnie Morales, who grew up in Chicago, the first-generation daughter of Belarusian immigrants. Chef Morales, a graduate of the Culinary Institute of America, honed her skills in several of New York and Chicago's Michelin-starred restaurants, including Tru, where she met her future husband and business partner, Israel Morales. Together, they opened Kachka, their dream restaurant devoted to food inspired by Russia and former Soviet republics such as Ukraine, Belarus, Georgia, and Uzbekistan. Eater National named Kachka to its list of Best Restaurants in America in 2015, 2016, 2017, and 2018, the only restaurant in Portland to be included, and Chef Morales was named a Rising Star Chef by StarChefs and a finalist for the James Beard Award for Best Chef: Northwest. We are eager to visit, sample the pelmeni, kubdari, and golubtsi (Google it!), and hear from Chef Morales about the glories of Russian cooking. 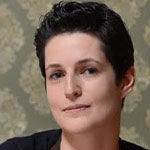 The daughter of Belarusian immigrants, Chef Bonnie Morales grew up in Chicago and trained at the Culinary Institute of America. She honed her craft in several NYC and Chicago Michelin-starred restaurants (including two-Michelin-starred Tru) before moving to Portland. in 2018, she was named a Rising Star Chef by StarChefs, as well as a James Beard "Best Chef: Northwest" finalist. She opened Kachka with her husband in 2014.

At this event, we will not be able to accommodate requests for separate tables. As per local guidelines, as well as the restaurant's own policy, attendees will not be required to present proof of vaccination for entry.

Do I have to bring printed tickets to the event?
No tickets are needed.
What does the ticket price cover?
The ticket price covers the full cost of the meal.
Do guests need to be of a certain age to attend this event?
Yes. All attendees must be 21+ to gain entry.
What must I bring to the event?
Please make sure to bring a government-issued photo ID. Additionally, if you plan on purchasing beverages during the event, make sure to bring cash.
Does this restaurant allow BYOB?
No. This restaurant is a non-BYO establishment. Outside alcohol will not be permitted at this event.
Can I bring guests/non-members to this event?
Yep! For this event, guest tickets are $85 + tax & tip, and you can bring up to 3 guests. Please note, guests are not allowed to attend unaccompanied by a member.
What is the event ticket cancellation/refund policy?
Tickets to our events are non-refundable. However, for emergency requests, we may allow members to transfer their tickets to friends, provided the guest ticket surcharge of $25 is paid when transferring a member ticket to a non-member. All ticket transfer requests (as well as the guest ticket surcharge) must be sent to us prior to the event. Any guests who have not paid the guest ticket surcharge will not be allowed entry.
What dietary restrictions/food allergies can be accommodated at this event?
At this event we will be able to accommodate all dietary restrictions and food allergies. Just make sure to update your dietary restrictions within your Account Info before or after you purchase tickets, or email us at [email protected] after you purchase tickets to let us know what your allergies/restrictions are so we can give the chef a heads up.