Just a year and a half old now, this beautifully designed eatery inside the UNC Charlotte Marriott Hotel& Conference Center, which Charlotte Magazine named one of the city's "25 Best New Restaurants of 2022," transforms southern staples into modern classics. Here, diners delight in such dishes as hot chicken deviled eggs, she-crab soup, fried green tomatoes with ghost pepper aioli, cornbread with honey butter and sea salt, ribs, meatloaf, shrimp and grits, and hoppin' john. Executive Chef Andres Prussing was born in Santiago, Chile and learned to cook from his grandmother. After graduating from culinary school in Santiago, he entered the restaurant world, working at establishments in Chile, Spain, and Miami before arriving in Charlotte. Influenced by his South American culture, he is excited to work with local vendors, bringing in fresh, high-quality ingredients from across North Carolina to produce a menu that will continue transforming Queen City's food scene. We are excited to visit and hear about Chef Prussing's life journey and food ideas. 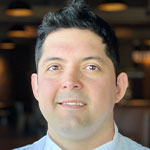 A Chile native, Chef Andres Prussing attended culinary school at INACAP in Santiago and has represented Chile at the Pan-American Culinary Olympics, winning a Silver and Gold Medal. Prior to joining Golden Owl Tavern in 2022, he interned at 2-Michelin-starred El Cingle, created his own catering company Bienenstich, and worked at several Marriot and Hilton hotels.

At this event, we will be accommodating timely requests for separate tables (rather than communal seating) to the best of the restaurant's ability. Additionally, all food will be served individually-plated rather than family-style. As per local guidelines, as well as the restaurant's own policy, attendees will not be required to present proof of vaccination for entry.