From the creative minds behind restaurant favorites Smok and Acorn comes Bellota, which is Spanish for “acorn.” Here, in the super-trendy The Source hotel, “Mexican food is back, baby,” as 5280 put it, courtesy of Executive Chef/Owner Manny Barella. Chef Barella, born in Monterrey, Mexico, cooked at a variety of five-star Napa Valley spots, including the Michelin-rated Solage Resort, before arriving in Boulder, where he worked as Chef de Partie at award-winning Frasca Food & Wine, and then on to the Mile High City, where he was sous chef at Uchi Denver. Did we mention that he was nominated as well for a James Beard Award? At Bellota, he works his magic on regionally inspired but inventive takes on street food classics like tacos, tortas, enchiladas, a half-dozen house-made salsas, and numerous offerings that take advantage of the wood-fired oven. There’s quite a buzz about Bellota, and we are so looking forward to sampling Chef Barella’s food and hearing more about his personal journey. 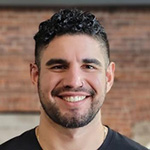 Hailing from Mexico, where he grew up and attended culinary school, Chef Manny Barella’s culinary journey led him around the US, including stints in the kitchens at the luxury Sea Island Resort in Georgia, at five-star Napa Valley spots Calistoga Ranch, Cindy's Backstreet Kitchen and Michelin-rated Solage Resort and finally here to Colorado, where he worked at Frasca Food & Wine as Chef de Partie and as Sous Chef at Uchi Denver before coming to the helm at Bellota.

At this event, we will be accommodating all requests for separate tables rather than communal seating. Additionally, all food will be served individually-plated rather than family-style. As per local guidelines, as well as the restaurant's own policy, we will not be requiring attendees to show proof of vaccination at the door to gain entry.

Do I have to bring printed tickets to the event?
No tickets are needed.
What does the ticket price cover?
The ticket price covers the full cost of the meal.
Can I bring guests/non-members to this event?
Yep! For this event, guest tickets are $75 + tax & tip, and you can bring up to 3 guests. Please note, guests are not allowed to attend unaccompanied by a member.
Do guests need to be of a certain age to attend this event?
Yes. All attendees must be 21+ to gain entry.
What must I bring to the event?
Please make sure to bring a government-issued photo ID. Additionally, if you plan on purchasing beverages during the event, make sure to bring cash.
What is the event ticket cancellation/refund policy?
Tickets to our events are non-refundable. However, for emergency requests, we may allow members to transfer their tickets to friends, provided the guest ticket surcharge of $25 is paid when transferring a member ticket to a non-member. All ticket transfer requests (as well as the guest ticket surcharge) must be sent to us prior to the event. Any guests who have not paid the guest ticket surcharge will not be allowed entry.
What dietary restrictions/food allergies can be accommodated at this event?
At this event, we will be able to accommodate all dietary restrictions and food allergies except for those with aversions to cilantro, corn, or onions. Please make sure to Update Your Dietary Restrictions within your Account Info before or after you purchase tickets, or email us at [email protected] after you purchase tickets to let us know what your allergies/restrictions are.
What COVID safety precautions will be taken at this event?
At this event, we will be accommodating all requests for separate tables rather than communal seating. Additionally, all food will be served individually-plated rather than family-style. As per local guidelines, as well as the restaurant’s own policy, attendees will not be required to present proof of vaccination for entry.