This year, restaurateur Sarah Gavigan decided to transform her Gulch eatery Little Octopus into Bar Otaku, a sister restaurant to her popular Otaku Ramen. Bar Otaku was inspired by Japan’s traditional izakayas, those casual pubs where people gather after work for food, drinks, and companionship. Gavigan returned to her native Tennessee in 2012, after almost 20 years in L.A., and found, to her horror, that Nashville was ramen-less. Setting out to rectify that situation, she discovered that the city sits on almost the exact same latitude as Tokyo, yielding many of the same vegetables and similar flavors. Drawing on local produce and meats, Bar Otaku is turning out soul-satisfying dishes like lotus root chips, fried chicken, pork belly, vegetable curry, and so much more. Edible Nashville calls Bar Otaku “a captivating establishment…The vibe is happy, the food playful, delicious, and perfectly balanced on the line between authentic and new", while Eater Nashville has included it as one of Nashville's 38 Essential Restaurants for 2019. We will be taking over the restaurant for the evening, and Sarah Gavigan will be on hand to share her story and answer your questions. 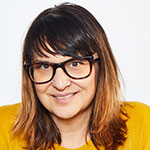 Chef Gavigan returned to her native Tennessee in 2012 after two decades in Los Angeles' TV and film scene. Back home, she threw herself into mastering the art of Japanese cuisine, a labor of love that has now resulted in arguably Nashville's most celebrated Japanese restaurants: Otaku Ramen (2015) and Bar Otaku (2019), both now named to Eater's 38 Essential Restaurants List for 2019.

Do I have to bring printed tickets to the event?
No tickets are needed.
What can/can't I bring to the event?
Please bring your ID as well as cash if you plan on purchasing beverages.
Are there ID requirements or an age limit to attend?
Yes. ID is required and you must be 21+ to attend.
What is the event ticket cancellation/refund policy?
Tickets to our events are non-refundable. However, for first-time emergency requests, we may allow members to transfer their tickets to friends, provided the guest ticket surcharge of $25 is paid when transferring a member ticket to a non-member. All ticket transfer requests must be emailed to us prior to the event and the guest ticket surcharge of $25 must be paid prior to the event. Guests who have not paid the guest ticket surcharge will not be allowed entry.
What does the ticket price cover?
The ticket price covers the full cost of the meal.
Can I bring guests/non-members to this event?
Yep! For this event, guest tickets are $70 + tax & tip, and you can bring up to 3 guests. Please note, guests are not allowed to attend unaccompanied by a member.