A fixture in West Loop since 2011, this Pan-American dining experience was created by Michael Olszewski, owner of the Michelin-starred restaurants Grace and Yūgen. Here, under the aegis of Executive Chef Alexander Quintero, diners encounter a menu that encompasses influences from Patagonia up through South and Central America all the way to Baja California. Amid a lush jungle décor, which can feel like a getaway from the chilly temperatures of the Windy City, Chef Quintero, a Miami-born, Costa Rica-raised veteran of The Four Seasons, the Ritz-Carlton, Joie De Vivre, and, most recently, Trump Tower Chicago, works his magic, finding inventive ways to serve octopus, scallops, pork shanks, lamb, Cornish hens, and vegetarian options. Toast hails Aikana, whose name derives from the indigenous people who live in southwest Brazil near the Bolivian border, for its “thrilling Food & Beverage program aiming to evoke luxury & delight from beginning to end of the dining and late night experience.” We are eagerly anticipating our visit to Aikana and learning more about the food of the Southern Hemisphere from Chef Quintero. 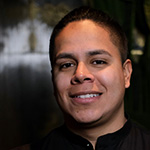 Born in Miami but raised in Costa Rica, Chef Alexander Quintero attended Le Cordon Bleu Miami and Le Cordon Bleu Chicago, training in French cuisine. After graduation, he refined his skills in Italian cuisine under Chef John Coletta, before transitioning to cook at top hotels such as The Four Seasons, Ritz Carlton, and Joie De Vivre. Most recently, he served as Sous Chef at Trump Tower Chicago.

At this event, we will be accommodating all requests for separate tables rather than communal seating. Additionally, all food will be served individually-plated rather than family-style. As per local guidelines, as well as the restaurant's own policy, attendees will not be required to show proof of vaccination at the door to gain entry.

Do I have to bring printed tickets to the event?
No tickets are needed.
What does the ticket price cover?
The ticket price covers the full cost of the meal.
Can I bring guests/non-members to this event?
Yep! For this event, guest tickets are $75 + tax & tip, and you can bring up to 3 guests. Please note, guests are not allowed to attend unaccompanied by a member.
Do guests need to be of a certain age to attend this event?
Yes. All attendees must be 21+ to gain entry.
What must I bring to the event?
Please make sure to bring a government-issued photo ID. Additionally, if you plan on purchasing beverages during the event, make sure to bring cash.
What dietary restrictions/food allergies can be accommodated at this event?
At this event, we will be able to accommodate all dietary restrictions and food allergies except allium allergies. Please make sure to Update Your Dietary Restrictions within your Account Info before or after you purchase tickets, or email us at [email protected] after you purchase tickets to let us know what your allergies/restrictions are.
What is the event ticket cancellation/refund policy?
Tickets to our events are non-refundable. However, for emergency requests, we may allow members to transfer their tickets to friends, provided the guest ticket surcharge of $25 is paid when transferring a member ticket to a non-member. All ticket transfer requests (as well as the guest ticket surcharge) must be sent to us prior to the event. Any guests who have not paid the guest ticket surcharge will not be allowed entry.
What COVID safety precautions will be taken at this event?
At this event, we will be accommodating all requests for separate tables rather than communal seating. Additionally, all food will be served individually-plated rather than family-style. As per local guidelines, as well as the restaurant’s own policy, attendees will not be required to present proof of vaccination for entry.